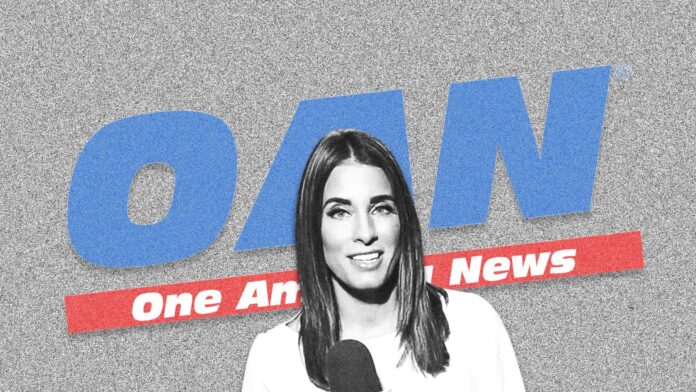 One America News has allowed host and “reporter” Christina Bobb to actively appeal to the network’s viewers over 140 times on air to donate to her nonprofit group funding bogus right-wing election “audits,” according to a new review by liberal media watchdog Media Matters for America.

In recent months, OAN has led the charge in promoting and boosting the so-called “audit” of Arizona’s 2020 election results. The audit, however, is a nakedly transparent effort by pro-Trump Republicans and conservative activists to erode the credibility of President Joe Biden’s decisive electoral victory over Donald Trump.

And, naturally, Trump has repeatedly and excitedly touted the Arizona process, suggesting that it would result in a domino effect of additional state audits that would find Trump had actually won the election and get him reinstated as president.

Bobb, who served as an adviser to the Trump legal team’s efforts to overturn the election following Trump’s loss, has been the face of OAN’s coverage of the Arizona audit. With Arizona Republicans giving the fringe cable network “exclusive” access in covering the process—all while mainstream reporters have been restricted to a tiny spot far from the auditing tables—Bobb has delivered frequent reports from the floor of the arena, repeatedly informing OAN viewers that the audit will prove fraud and pave the way of “America’s audits.”

Besides providing sympathetic coverage to the “audit” and hosting GOP legislators who are pushing their states to replicate Arizona’s conspiracy-riddled effort, Bobb—who anchors OAN’s Weekly Briefing—is a major financial backer of the Arizona audit that she’s been reporting on and helped push the Arizona Senate to go forward with the process.

While several media outlets have already reported on Bobb’s efforts to raise money to fund the pro-Trump audits and her intimate involvement in Arizona Republicans’ attempt to undermine the election results, this is the first time the scale of Bobb’s on-air fundraising attempts has truly been revealed.

According to research conducted by Media Matters’ Bobby Lewis, provided exclusively to The Daily Beast, Bobb has promoted her nonprofit group Voice & Votes in 22 individual segments between May 30 and June 28, calling on viewers to donate to the organization to fund the audits. Those segments, meanwhile, were aired by OAN a total of 148 times.

Voices & Votes was co-founded by Bobb and fellow OAN personality Chanel Rion, who is listed as the group’s chief marketing officer. Rion is OAN’s White House correspondent and has a long history of peddling insane conspiracy theories. She also teamed up with Rudy Giuliani on his Ukrainian dirt-digging mission against Biden.

Throughout these segments, some of which had been replayed on air nine or more times, Bobb called on viewers to make sure that the Arizona audit is “fully funded” and “help get other states out to Arizona to replicate this audit.”

Telling OAN’s audience—which OAN President Charles Herring has publicly acknowledged is mostly comprised of senior citizens—to “contribute to the effort” to push Republicans in other states to begin their own audits, Bobb has already been able to spend at least $150,000 on Arizona’s process and has continued to raise additional funds since.

According to Media Matters, at least three of Bobb’s on-air fundraising segments were introduced by OAN anchors as reporting updates on the Arizona audit.

However, the minute-long packages contained no real news and instead featured only Bobb arguing why viewers needed to donate to her group.

In another sample segment, Bobb blasted Republicans who haven’t yet gotten on board with peddling conspiracies that the election was stolen, claiming they represent “the biggest obstacles” in getting audits in place in other battleground states that Trump lost.

Besides pressing OAN viewers to call those representatives she, of course, also encouraged them to donate money to her.

As Lewis pointed out to The Daily Beast, Bobb’s actions are not just journalistically unethical on an individual level, but also a signal that OAN appears to be putting into place a perpetual audit machine with these fundraising appeals.

By hammering away at the baseless and unfounded claims that the 2020 election was riddled with fraud and therefore illegitimate, the network can then state that the only way to expose the fraud is through these so-called audits, which they can help get started by sending money to Bobb’s nonprofit.

And after Bobb’s group is able to fund additional audits, OAN will be there to extensively cover them.

Breaking News: Ozzy Osbourne is determined to get back on stage